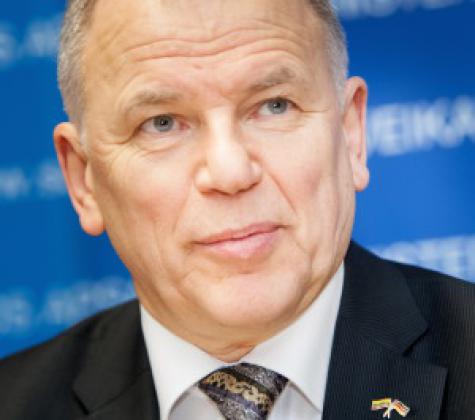 Threatening the Health of European Society

In a speech delivered on the 2nd of December at Harvard University, Dr. Vytenis Andriukaitis, the European Union’s Commissioner for Health and Food Safety, explained his audience how his career went from treating patients as a medical doctor to “treating” society as a legislator.

“When I started practicing,” so said Dr. Andriukaitis, “it did not take me long to realize that 50% of my job was not about science but about learning to care for people. What I mean is not just caring for people individually – one patient at a time – but to care about people in general. This brought me to take responsibilities in the area of public health later on. Today, as I am sitting in the chair of the EU Commissioner for health and food safety, I feel that my job is even more about ‘treating’ the society ensuring that there is this state of complete physical, mental and social well-being as described by the WHO.”

“I would like to focus on an issue that is particularly important to me: the general misperceptions of what health really is. Let me remind us all of the definition of health as it is proposed by the World Health Organisation: “Health is a state of complete physical, mental and social well-being and not merely the absence of disease or infirmity.” So, we agree: it is about complete physical, mental and social well-being. It is therefore not only about the disease and the cure.” (italics in the original text of the speech)

Couldn’t be any clearer. All definitions of health other than the one adopted on 22 July 1946 by the WHO are discarded as “misperceived.” When the European Union’s Commissioner for Health and Food Safety publicly provides this kind of clarity while addressing an audience gathered at one of the world’s most prestigious universities, we shouldn’t take things lightly. This definition of health is more than meaningful in the context of European health and food safety policies, especially since the Commissioner’s definition fills a void that tends to persist in EU’s health-related regulations, in which, so far, the Union’s legislators failed to provide a clear and legal definition of health.

So, let’s take the Commissioner’s definition and insert it in Article 2.1.5 of the European Nutrition and Health Claims Regulation (NHCR). This is the Regulation by way of which the Union exercises complete control over health claims used in commercial communication. According to Commissioner Andriukaitis, Article 2.1.5, which provides a definition of the term “health claim,” must be perceived as follows:

“health claim” means any claim that states, suggests or implies that a relationship exists between a food category, a food or one of its constituents and a state of complete physical, mental and social well-being and not merely the absence of disease or infirmity.

Speaking at Harvard, Dr. Andriukaitis brought to light an unseen aspect of the EU legislators’ definition of the term “health claim.” Health claims, as defined by the Commissioner, cover practically every aspect of life, even though the definition delimits the term to only one factor that entertains a relationship with a state of complete well-being: food. However, this delimitation is abrogated in the NHCR’s own Recital 28, which provides that “[d]iet is one of the many factors influencing the onset of certain human diseases. Other factors such as age, genetic predisposition, the level of physical activity, the consumption of tobacco and other drugs, environmental exposure and stress may all influence the onset of human diseases. […].”

Indeed, food isn’t the only determinant in the field of health and disease. So, when health is defined as broadly as done by the EU Commissioner and when food is qualified as no more than one of a multitude of factors influencing health and disease, the – potential – field of application of the NHCR spans practically every aspect of life.

Arguably, the definition of “health claim” is provided in the NHCR “for the purposes of this Regulation.” That might explain how this definition limits de NHCR’s current field of application to claims used in commercial communication concerning food. Still, in the absence of a specific definition of health “for the purposes of this Regulation,” the term “health claim” does mean any claim that states, suggests or implies that a relationship exists between a food category, a food or one of its constituents and a state of complete physical, mental and social well-being and not merely the absence of disease or infirmity.

When one adheres to the WHO’s and Commissioner Andriukaitis’ definition of health, it’s not unthinkable that the Union’s definition of health claim could eventually lead to the Union taking control over claims concerning social well-being and factors such as physical activity and environmental exposure. According to Commissioner Andriukaitis: “We need to introduce rules, adopt new laws, change societal conditions, educate encouraging to change behavior in full respect to people’s free choices, helping them to avoid risk factors. These rules cover marketing, taxation, pricing and others. Without them our health systems are worth nothing.”

In view of this, the scope of the current NHCR is still limited. Article 5.1(a) provides that “[t]he use of nutrition and health claims shall only be permitted if … the presence, absence or reduced content in a food or category of food of a nutrient or other substance in respect of which the claim is made has been shown to have a beneficial nutritional or physiological effect, as established by generally accepted scientific evidence.”

This provision either reduces the definition of health to no more than beneficial nutritional or physiological effects, or, it provisionally excludes the making of health claims concerning aspects of complete well-being other than beneficial nutritional or physiological effects of foods. In Article 10.3 the European legislators shed some light on this issue. “Reference to general, non-specific benefits of the nutrient or food for overall good health or health-related well-being,” so they determined, “may only be made if accompanied by a specific health claim included in the lists provided for in Article 13 or 14.” Since health claims placed on the Union’s Lists only concern beneficial nutritional or physiological effects of foods, the terms “overall good health” and “health-related well-being” might very well encompass a field as broad as the one described by the WHO in its definition of health.

Don’t think that associating food with social well-being is a far-fetched concept. At Leiden University, Dr. Lorenza Colzato leads a project aimed at determining whether a mix of probiotics and amino acids can slow the decline in “social cognition” in elderly people. The European Union supports this project with no less than 1 million Euros. This week, in an interview with NutraIngredients, Dr. Colzato told Shane Starling: “…, we will use epigenetics (changes in gene expression triggered by the environment) to study and understand the mechanisms underlying the interactions between brain, nutritional intervention and behavior.”

Such projects perfectly fit the broad perception of health as a state of complete physical, mental and social well-being. They go hand-in-glove with Dr. Andriukaitis’ vision that the Union must fulfill an active role in the area of public health and that, sitting in the chair of the EU Commissioner for health and food safety, his job “is even more about ‘treating’ the society.”

This urge to “treat” society first emerged when, at the age of ten, the young Vytenis was struck by Dr. Martin Luther King’s “I have a dream.” In the words of the Commissioner, Dr. King’s “speech of freedom greatly resonated in me from that time. I was indeed born in a Soviet Union gulag in the arctic region, where my parents were deported in 1941 and had to survive for sixteen years. My mother and my brother were allowed to come home – to the still occupied Lithuania – when I was just 7 years old. I could not have chosen any other path than the one that led to freedom – this is how I got involved in the independence movement and later became democratically elected as Member of Parliament for the first-time.”

The path to freedom followed by Dr. Andriukaitis led him to preside over the vast bureaucracy of a Directorate that, together with its respectable European co-legislators, shows an idiosyncratic disrespect for the freedom that he wholeheartedly missed when he lived in a Soviet Union gulag. But, without a doubt, it did lead him to a position from which he oversees a Directorate that is very busy “treating” society.

In the NHCR, undergoing societal “treatment” is reserved exclusively for members of the European society defined as food business operators. The “treatment” is based on the false narrative that, in business operators, freedom of speech is a disease-risk-factor that inevitably leads to the development of a societal disease. Each and every business operator is deemed incapable of dealing with the fundamental freedom to impart speech without exposing society to harm and distress. So, they shall be radically deprived of this risk factor called freedom. Likewise, all their potential clients – also known as consumers – shall be deprived of the fundamental freedom to receive speech originating from food business operators.

Health, as defined by the WHO, “is a state of complete physical, mental and social well-being and not merely the absence of disease or infirmity.” The WHO’s Constitution also provides that “[t]he enjoyment of the highest attainable standard of health is one of the fundamental rights of every human being without distinction of race, religion, political belief, economic or social condition.” The WHO ranks health as a fundamental right equal to that other fundamental freedom: the freedom of speech.

The gulags of this world show that no social well-being is possible without being able to exercise one’s freedom to impart and receive speech. A Regulation that “treats” society by destroying one fundamental freedom, the freedom to impart and receive speech, in order to achieve another freedom, the enjoyment of the highest attainable standard of health, is a self-contradictory and counterproductive legal remedy.

It poses a serious threat to the health of European society.