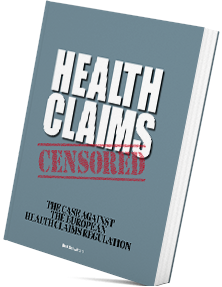 Health Claims Censored explains how consumers and food manufacturers are negatively affected by the way the European Union has taken full control over all commercial information concerning the health benefits of foods and food supplements.

Health Claims Censored exposes the European Health Claims Regulation as an imbroglio of conflicting, disproportionate and inappropriate concepts aimed to permanently silence all but a few food business operators in the field of nutrition and health. Although the Regulation leaves the Precautionary Principle unmentioned, it is the unprecedented and totally unwarranted application of that principle in the field of commercial speech that underlies the unconditional prohibition and censoring of health claims on food products. Under the flag of a ‘high level of protection’ and ‘highest possible standards of scientific assessment’, the Regulation and its administration by the European Commission and the European Food Safety Authority, leads to the destruction of knowledge about the potentially beneficial health effects of foods. Seen by its adherents as an ‘Atlantikwall’ against misleading commercial information, the Regulation ruthlessly and effectively prohibits non-misleading information also.

Taking a ‘freedom of speech’ and ‘freedom of choice’ perspective, Health Claims Censored furthermore exposes the political and ideological drivers behind the Health Claims Regulation as unconditionally and compulsively anti-industrial and anti-commercial. As a result, the Regulation was turned into a precautionary and coercive legal instrument that ruthlessly replaces ‘commercial speech’ by State-authorised speech, essentially for no other reason than that the speech was commercial and coming from industry to begin with. The Regulation symbolises the idea that free markets will inevitably fail and that equally inevitably, consumers will suffer unless industry and business operators are placed in a legal straightjacket that carries the words ‘guilty until proven innocent’.

Health Claims Censored is an exegesis of the texts streaming without end from the unelected European bureaucracy. Claiming to act in the interest of the consumer, this bureaucracy works as the unseen hand that attempts to meticulously regulate and influence consumers’ dietary choices. Because the Health Claims Regulation takes legislation from the field of safety into the field of nutrition and health communication, it carries a warning for those who still think that the European Union will leave them alone in their communication with consumers. ‘Brussels’ is expanding its competence far beyond the confines of the Treaty. Unfortunately, the European Court of Justice is uncritical of this development. Yet, given that the regulation of health claims in Europe is a process that seems to have taken its its course irrespective of sensible and reasonable critique, it is that same Court that should eventually rule whether the Health Claims Regulation is or isn’t a disproportionate piece of legislation.

We deliver updates from our blog directly to your email inbox.