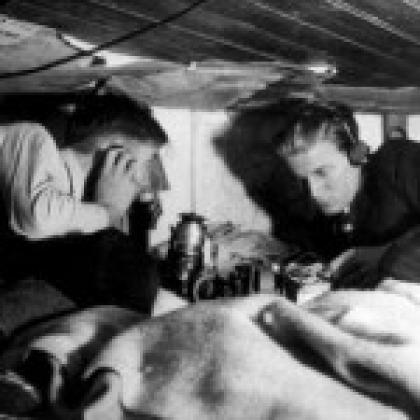 During the last world war, my father, who was then in his early twenties, escaped from prison and probably worse, when the Gestapo, during a routine control in the streets of Groningen, failed to notice the radio-receiver he was carrying in the bag attached to the side of his bycicle. Possessing a radio was considered an act of resistance against the German occupation. In spite of the risks involved, the Dutch concealed their radio’s in attics and basements to catch the broadcasts sent from London by “Radio Orange.”

Then and today, controlling power implies controlling communication. This becomes especially evident in and when preparing for wartime and “code red” emergencies. Just to give you a recent example: on June 6, 2012, President Barack Obama, considering matters of national security and emergency preparedness, ordered that “[t]he Federal Government must have the ability to communicate at all times and under all circumstances to carry out its most critical and time sensitive missions.” According to the President of the United States, communications from the executive branch “must be possible under all circumstances to ensure national security, effectively manage emergencies, and improve national resilience.”

Under the European Treaty, the protection of consumers’ wealth and health was assigned a level of supranational importance equal to that of a government’s “most critical and time sensitive missions.” This is how, during the early years of this century, the European bureaucracy identified an “enemy of the State,” which it came to describe as “food business operators.” In information circulated by anti-industry specialists it was alleged that these operators used their communication infrastructure, being the labels they placed on their products and the advertisements made for them, to broadly and systematically disseminate disinformation that was grossly and irreparably distorting everyone’s “dietary choices.”

Though the risks were still uncertain, clearly, the Union was under attack and the enemy had to be contained. The possibility of a Union-wide outbreak of deadly and disabling diseases and the consequent disintegration of the Union had to be precautioned. In the Wargame Rooms in Brussels, it was concluded that only one option of last resort remained. The enemy had to be silenced for once and for all. The Consumer Protection Directorate was to seize full control over all “commercial communication” concerning the effects of food on human health. The carriers used to disseminate health messages – labels, advertisements, webpages, etc. – were to be bluntly confiscated and “Unionalized.” From now on, the Directorate would publish in a Union Register lists of claims that it considered to be harmless.

Had my father still lived today, would he still have had a concealed radio in his basement to clandestinely listen to commercial health messages sent to him by food business operators in exile? I’m not so sure. This anti-industry wargame is a stealthy and covert one that is being played in absentia and in loco of all European consumers. My father would not have had a clue that he was being protected against an enemy that he would have never perceived as one. He would have been unaware of the fact that the “consumer power” he considered his to exercise had been surreptitiously taken from him in exchange for protection against an enemy he would have never picked. Namely, his son.